An adaptor to connect a Compact Flash memory card to an IDE interface (such like on divIDE).

In fact, it's the same adaptor like those from Pavel "Zilog" Cimbal, but this one is done completely in SMD so the size of the is smaller and more compact (70x58mm).

This product belongs under the GPL license! Assembly documents are for Eagle 4.09 together with Gerber format and a GIF file with parts positioning.

You can buy them cheaper at e.g.:

The CF-IDE is an adaptor to connect a CF (Compact Flash memory card - CF type I or II) to IDE connector (opposite) so it's possible to insert it to the IDE interface AND to connect another IDE devices onto it, e.g. next CF adaptor, HDD, CDROM or so.

There is a power connector on it, same like on any IDE HDD. It is not needed to be connected when using divIDE because it takes the +5V directly from the IDE connector. The power is detached by a diode so no conflict when using external power (which could be needed with a higher power consumption) is possible.

The jumper Master/Slave (M/S) says whether the CF will be as a master or a slave. In the picture it's in the master position. You can switch between M/S by removing or changing the jumper to the second position.

The LEDs indicate CF's state. L3 (red) indicates an access to the CF. Reading and writing is usually interrupted in very short time periods, so it's normal that the L3 rather flashes or lights at lower intensity when accessing the CF. The L2 (yellow) LED indicates that the CF is inserted and the L1 (green) means that the power is present. 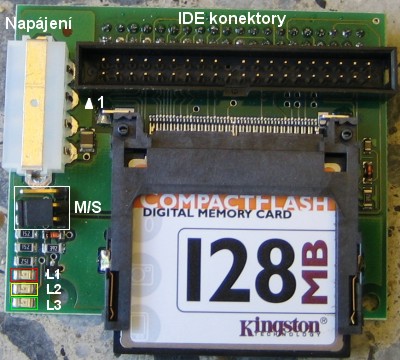 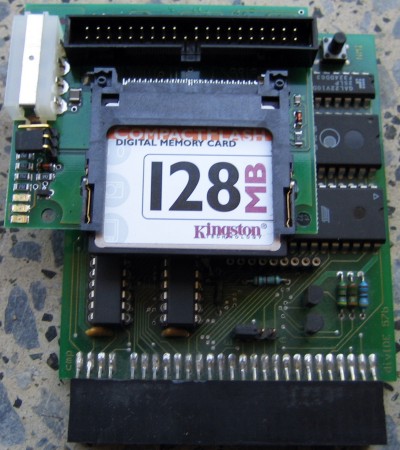 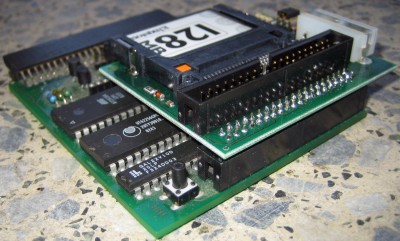